The Other Whroo Cemetery

When walking recreationally over twenty years ago I spotted some very regular mounds in a gully nearly two kilometres from central Whroo. Repeated walks were unsuccessful in finding them again, the bush had altered and new undergrowth had obscured them, making it easy to become disorientated. In June 2006 the area was walked when undertaking research for the Goulburn Diggings Project *.
According to records ( Waranga  Rate Book , McIvor News ,Waranga Echo  and more )  this area was being worked for gold ( both alluvial and reef) from 1858 onwards and had become a mini town with slab huts  and businesses .
The Waranga Echo of August 1868 quotes    ".... likely to be tried again.Several very good patches worked but lead lost about 7 years ago ".
Poor conditions and lack of medical care and good nutrition took its toll on the people there ,  minor illnesses and accidents sometimes proving fatal . Deaths  occurred and an unofficial burial place was created , the official Whroo cemetery was in its infancy and  no records of these burials exist.
In an area of roughly 200 metres x 80 metres 26 adult and 2 childrens graves were identified . Six adult graves were found either side of a narrow track and the rest randomly placed on the sloping land , away from the diggings. Four more graves were found to the North of the area.
The alignment of the graves is roughly N/W - S/E and similar to the rough placement of those in the first Rushworth Cemetery. 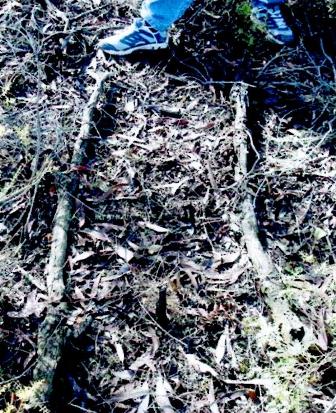 The small grave has two pieces of rotting wood along the sides and a small post. Photo courtesy of Goulburn Diggings Research
Subsequent to our finds this whole area was fieldwalked by the GDR* team accompanied by archaeologists from Heritage Victoria  who verified them as being graves in an unofficial cemetery.

*Goulburn Diggings Research is a community based Organization which has meticulously been plotting and recording the historical remains and gold related sites for the last 10 years , using GPS units , photography , mapping and historical documents. It is dedicated to finding and identifying
the sites for future generations and is recognised as an important source of knowledge for Government Departments. 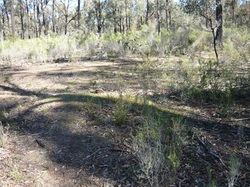 A typical lone grave in the bush near Poverty Gully. They are usually sited not far from a track on a slight rise and a little way away from nearby diggings.Their E/W orientation varies.There are few records available to confirm any details about the deceased. 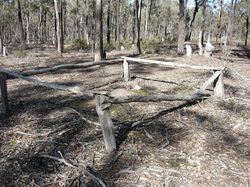 Known locally as Ludlows grave, but there is no evidence for this except that is lies to the west of Ludlows track in Whroo , and the Ludlows mud brick house is not far away .The wooden surrounding posts are rotting . 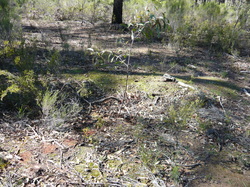 A lone grave in Cemetery Gully , not thought to be associated with the cemetery.
Some details do exist about graves outside the Whroo Cemetery , the earliest found were from 1855, before this the Police Paddock, Murchison seems to have been the local cemetery in use.

There are four  registered burials in Fountainbleu , another mining area  to the west of Whroo:


The Thompson family were well known in Fountainbleu, and a reef is named after them. The family housesite still contains recognisable features such as the outhouses,   postholes and glass and pottery shards. It was not uncommon for graves to be in the family property and would be the obvious place for the tiny twins  and Henry to be buried but  no trace has been found.