Whroo is situated 7 kms south of the central Victorian town of Rushworth. It was first settled in 1853 and the Old Whroo Village, with its large cacti marking an hotel site , was some distance south of the now famous Balaclava mine on the Rushworth/Nagambie road. This road does not follow the original track , having been straightened and widened , it had a more meandering route around diggings and the hotel.
Gold was discovered and the area soon became home for thousands of miners all thinking they would get rich, few did. The community grew , waxing and waning depending on the new finds and the weather , for water was needed to process all the gold, be it panning,puddling or crushing.
Early mining was alluvial creek bed mining which then progressed to shaft or reef mining , not always going happily hand in hand.  Conditions were basic and early miners were often single men, some having jumped ship in Melbourne to go to the goldfields of the area, but some did bring their wives and families as the records show.
Complaints now considered common and curable were killers, influenza being the major cause,  deaths in the years between 1861 and 1890  were particularly  high , especially among children and stillborn infants .
Diptheria , typhoid , tuberculosis and phthisis ( commonly called miners disease, actually Pulmonary tuberculosis ) were the causes of death on many certificates , mining accidents being relatively uncommon.
Legislation for the Compulsory registration  of Births, Deaths and Marriages was not introduced until Oct 1853 and in a remote area with a changing population it was not always followed , some records merely being recorded in the cemetery receipt book as someones child.... often not named. 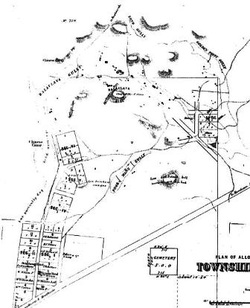 The map of 1857 shows Whroo and the more southerly  Whroo village.
The Cemetery is clearly marked.It also shows the developing town to the south east of Balaclava Hil and Poor Mans Gully where there are housesite remains and a well. The path from the central area at the north end of Poor Mans Gully linked the town with the Cemetery.
The earliest burial recorded in the cemetery is 1858 but the town started in 1853 and it is highly unlikely there were no deaths in those intervening years. It would appear that the site was used for burials before it was made official.  This happened in the Rushworth cemetery and others , and from the original plan the early burials are marked before the organised plan was created. This was very common and  early registers were frequently  but accidentally  destroyed, resulting in guesswork and memory when compiling the official registers years later.
The Whroo Cemetery Trust held their first recorded meeting in 1860 and the  letter approving the setting apart of the land for a cemetery on July 9th of the same year. The setting out of the sections with the signage ,and the erecting of the paling fence took many committee meetings to finalise , whilst the keeping of the records appears to have taken second place. The Fee Board, now in Rushworth Museum  , took many discussions to finalise too, with detailed instructions on the wood, the paint, the lettering to be used .The grave labels were not discussed until Sept 1869, and in 1870 it was proposed that a book be kept by the sexton ( Mr.Burton) to enter interments , this is twelve years after the first known interment.  It is hardly suprising, then, that the early records are rather ambiguous in places and some plots listed as unknown , as it would appear to have been compiled , in part , from memory.

The 150  iron trefoil markers were a gift from John Lewis , the owner of the Balaclava lease, noted at the meeting on 22nd June 1870, where the laying of graves in parallel lines was discussed along with the paths in between , if you look at the Plan you may wonder what their idea of parallel was. When these markers had all been allocated numbered wooden crosses were used, with the numbers painted on. Over time the numbers have worn off. In the Register and on the crosses the numbers started again at number one, this has caused confusion for everyone ever since.
The sections were to be clearly marked and brick guttering constructed , the section signs being described in detail. In Oct 1872 it was approved that wooden quartering be puchased for the purpose of pegging out the ground and the Rules officially made.These are very detailed and seem to cover every eventuality, including what had to be done with excess soil after a grave was dug by any other than the sexton.

The seeming lack of urgency in sorting out the cemetery delayed so many decisions and by now it had been in use for 17 years.
Alf Cheong , secretary of the Trustees for many years and a descendant of the Cheong family who ran a successful market garden on Whroo , told me the earliest records had been destroyed by fire, along with the plan years ago. 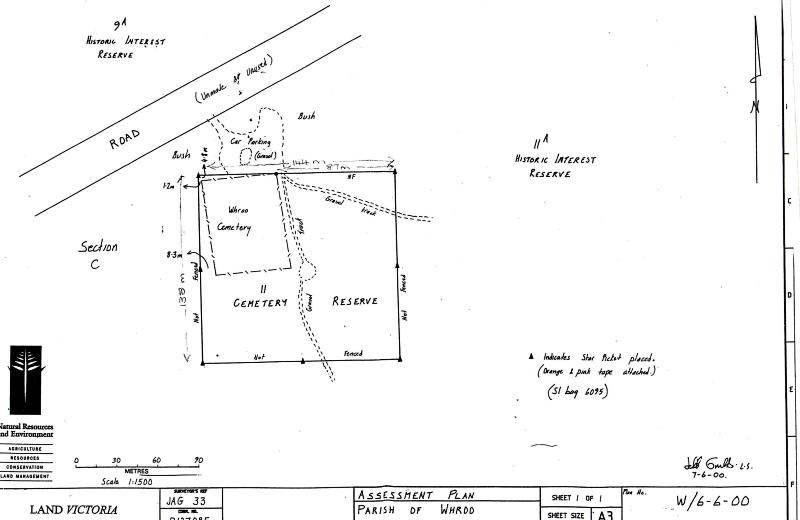 This map shows the actual area of land designated the Cemetery Reserve, although only a portion was ever used
The early years in Whroo were hectic , the comings and goings of miners dependant on where the latest 'rush' had been discovered. Whroo was frequently nearly deserted as people moved around, the idea that there was continuous activity is incorrect . In between the rushes a few solitary miners worked their claims  doggedly, convinced theirs would  be THE one. The ups and downs of the successes may be read in the Government Mining  Reports .
All miners had a fire burning and the landscape altered drastically as the trees were burnt, soon leaving a vista resembling a moonscape .By 1863 the trees were resprouting and the area was again covered with tall closely packed trees. Again these were felled,  but this time for mine props, timber and building , for the second time in 15 years.
Reef mining took over from alluvial mining , with investment made in machinery , miners were now employed by the Mine owners, John Lewis being the best known. Some alluvial diehards  still worked small claims but the rich pickings had been taken . Even now after rain it is still possible to go 'specking' - looking for specks of gold washed from the soil and seen lying in the runoffs .
A lot has been written about the Balaclava Mine, its imposing hill dominates the town and it became a main employer until yields dropped ,  but there were other successful mines in Whroo away from the central area , where yields were good , such as White Hills , 9 Mile Diggings , Scotchmans , Fountainbleu and Parsons Gully . Local newspapers , the Waranga Chronicle and Waranga Echo ,  gave weekly reports on the mining activities
Some mines were worked on tribute, miners paying all expenses and receiving a proportion of the found gold.
Other reefs yielded payable gold , that is gold that was worth the effort of retrieving it .
Gold needs to be processed to extract it from the rock and this led to the establishment of puddling machines ,  stamping batteries ( where the rock was literally pounded )and later the use of cyanide . The noise from the  stamping batteries made the whole town shudder and with the dogs barking, miners working, horses and children it was certainly not the peaceful place it is now.
As the years progressed Whroo settled down with businesses , the inevitable numerous hotels and a charming reservoir. The reservoir is rather hidden away and the pipes serving the town are still there, albeit covered with scrub and undergrowth. General Stores, slaughterhouses and Chinese market gardens supplied the population . The Register shows numerous burials for some of them - Darrochs , LeRoys , Pettifers , Cheongs ,  Camerons , Bazeleys , Allens , Birneys and Berrys to name a few , and descendants of these families still live in the area. 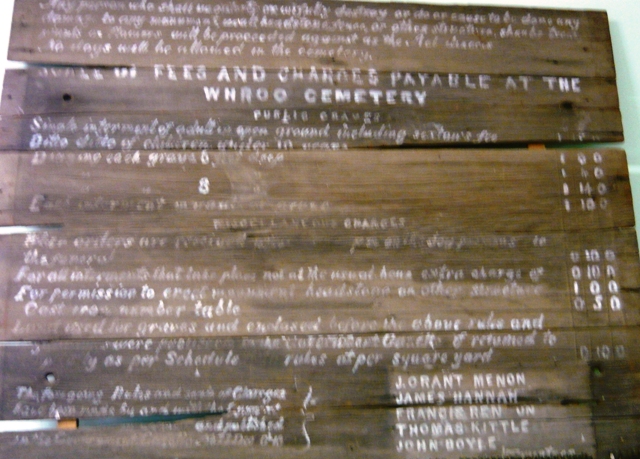 The Board of Rules and Fees whcih took so long to complete, it is now in the Rushworth Museum
Contents of this website may not be reproduced or republished without permission - copyright Nicola Thomson 2013
Proudly powered by Weebly